WORLD HERITAGE MUSEUM ISLAND and the future Humboldt Forum. From Schinkel via Chipperfield all the way to Stella. Development and evolution of a unique museum landscape. 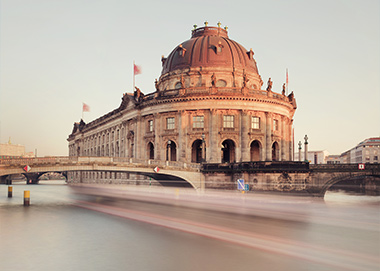 Over the course of this approximately two-hour walk on Berlin’s Museum Island, which has been a UNESCO World Heritage Site since 1999, I will explain to you how you can trace the different socio-political developments from the architecture of the individual buildings and indeed also the attitude of the respective rulers. The walk, therefore, looks at architecture as a mirror of social realities and change. The tour begins with an explanation of the reconstruction and intended use of the Berlin City Palace as the future Humboldt-Forum. There then follow two short talks as an aside – on columns (development since ancient Greek / Roman times, including the function of classical order attributed to them) and on the creation of the museum genre (the purpose of such establishments up to the present day). This provides the background to the tour’s main areas of emphasis outlined above. The main focus of the guided tour is then a walk passing the individual buildings in the order in which they were built to illustrate the architecture as a mirror of social realities and developments.

Meeting point: Granite basin in front of the Altes Museum at the side of the Lustgarten (Map)