HISTORICAL BERLIN - A walk through 775 years of the city’s history, from the Nikolaiviertel to the Brandenburg Gate. 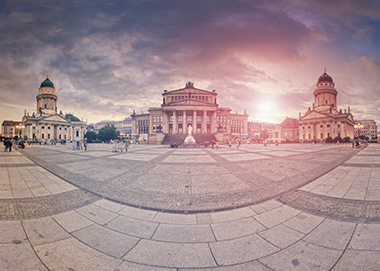 The German art historian and publicist Karl Scheffler (1869-1951) made the following observation in his book ‘Berlin – ein Stadtschicksal’ (Berlin – A City Destiny) published in 1910 (freely translated): “Berlin doesn’t want love from its residents. While deep down the soul of the city is not national, it is also not sentimental. As if with a witty word of self-irony this toughly determined one-off city helps itself to get over the hidden tragedy of its existence (…) over the tragedy of a destiny, which makes Berlin (…) a city condemned forever to becoming and never being.”

Try over the course of this approximately three-hour guided tour from Alexanderplatz to the Brandenburg Gate to form your own impression. The route through the historic centre of the German capital leads us past the top ten places associated very closely with the city’s long history, which compared with that of other major cities has without doubt been especially full of change: Alexanderplatz, Nikolaiviertel, the Berlin City Palace construction site, Museum Island, Unter den Linden, Gendarmenmarkt, Wilhelmstrasse, Brandenburg Gate and more. The tour’s time line stretches from the first mention of the adjacent twin town of Cölln in the year 1237 to the present day.