PRENZLAUER BERG - From the prototype of living conditions unfit for humans via hip and trendy district to gentrified oasis of prosperity. The meteoric career of a legendary area. 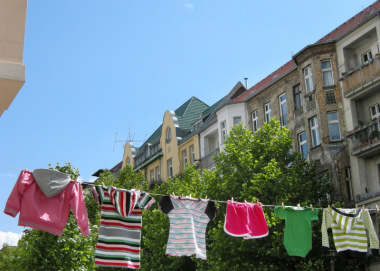 Rising rents, the fact that even people on average salaries are being forced to move out of the city centre, the constantly growing need for affordable homes – these are hotly debated topics in Berlin politics and society. Prenzlauer Berg, on the one hand almost mythically romanticised as the epitome of a hip and trendy district, on the other the target of mockery and derision (e.g. about Swabian ‘Block Wardens’, who would ideally like to introduce obligatory cleaning of hallways and pavements here as well), is the prime example of a development that is known as ‘gentrification’. We go in search of evidence from Senefelder Platz to the ‘Kulturbrauerei’ listed events complex on a walk of around two and a half hours around Germany’s largest contiguous district of the late 19th century period known as the ‘Gründerzeit’.